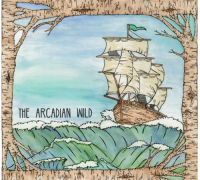 If you were in church on Sunday, you heard me play the video in the link below. It’s from a band called “The Arcadian Wild” and I’ve had their album on repeat for the past month or so. I was thrilled to see that they have sheet music available for sale for the instrumental track on their album. I bought it to support them and then realized that the piece was pretty far over my head.

I wish I had a recording of my first attempt. It probably took me 10 minutes to get through the whole thing and the result was almost unrecognizable. I played probably played this 200-300 times over the course of a month, and it was really fun to be along for the ride as my muscles would develop the required memory and different parts would start to click. That happens with every piece I learn, but I really noticed it with this one. I, of course, didn’t get a perfect version on video, but every once in a while I make it through without errors.

Anyway, here’s my recording of the piece, but you can find it on Spotify and other music services if you want to hear the real version.

Update: A few years later, I revisited this and memorized it. Below is a new recording that has better audio since I was recording digitally instead of with cheap microphones.

One thought on “The Arcadian Wild – Hers”