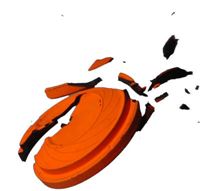 While very often I believe that “done is better than perfect”, trap shooting is not one of those times. Don, Logan and I headed to the range for the first time in about nine months. I generally hit around 18-20 out of 25 and my best round ever was 23. I thought I’d be pretty rusty, but on my first round I just kept hitting them. I was able to stay pretty calm until I got to the last position of 5 clays. 20 in a row. Wow. Just a few more. As I hit, one, two, three, and then four of them my nerves really started to take over. I had 24 in a row, already setting a personal best, and I was now one trigger pull away from the elusive perfect round. It’s not as difficult as bowling a 300, but it’s still pretty rare. You get a badge from the gun range and the envy of your fellow shooters. All those thoughts were swirling through my head. I tried to clear them out, take some deep breaths, focus on just one more shot like I had been doing all morning. I called “PULL!”, the clay flew out and I thought “Oh good, an easy one!” I moved the gun along the flight path pulled the trigger and… instantly knew it was wrong. I’m pretty sure I led it too much and the clay sailed to the ground unharmed. 24 out of 25. A great score, but it was obvious to everyone that I choked under the pressure.

As with many other sports, once you figure out the mechanics, trap shooting is mostly a mental activity. Can you stay focused? Can you keep your nerves in check? Can you get into the zone and let your body do it’s job? It’s a very interesting challenge because the only way I’ve found to get better is to train and be in that situation. Faking it works to some extent (pretending you have a prefect run even if you’ve already missed) but it’s not the same. The pressure is getting easier over time and that’s what keeps me going. I used to freak out when I was close to getting 20/25 and now I am almost blasé about it if I’ve already missed one.

Will I get to 25? I know I can do it, but I wouldn’t be surprised if it takes a few more great runs to get me there so I can conquer these nerves.