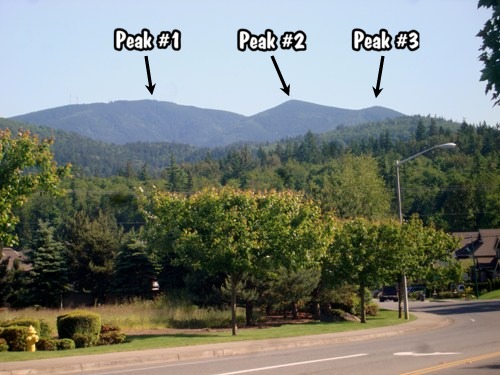 It just occurred to me that this title would work for a golfing post, but that's not what this is about. On Sunday afternoon, I headed down to Tiger Mountain as soon as I got home from church. It was 70 degrees and sunny so the place was busier than I've ever seen it before. Thankfully I had spent some time with the map the night before and figured out a route that I thought would avoid the crowds.

Tiger Mountain is made up of a series of peaks and my route took me across all three of the biggest peaks which are numbered 1, 2 and 3 from east to west. The photo above is taken from the street that leads away from my house. The main trail up the mountain only goes to peak 3 and it feels like walking through a busy mall because it's so crowded and loud. My route headed up the eastern side of the mountain: High Point Trail, Dwight's Way, Lingering Loop Trail, Tiger Mountain Trail, east at Fred's Corner, north on West Tiger No 1 Trail, then west along the peaks trail and then straight down on the cable line trail. All in all it was 6.5 miles and 2700' total vertical gain.

I saw maybe five or six groups all the way up to peak 1 and across to peak 3. When I got about two tenths of a mile from peak 3 I started to hear the whoops and screams from the huge crowd (30+ people) on top of the main trail.

It was my first time on the other two peaks and I was incredibly impressed. The east side of the mountain offers a very different feeling and peak 1 has an incredible view. It was hazy but I could see a long way south, west to the sound, and northwest to Seattle and Bellevue. I was also looking down on a bunch of the paragliders that launch from the southwest side of the mountain.

On the hike up I was thinking about the numbers from Lost and trying to figure out if I could make 4 8 15 16 23 42 spell something interesting. About that time, I heard voices coming through the woods. I rounded a corner and saw a radio tower! A few minutes down the trail and I came up to a building that was surrounded by a fence carrying signs about staying out due to some weird radiation from the towers. Luckily I didn't see any polar bears.

It was a long trip and wore me out. Other than the 30 minutes I spent on top of peak 1 taking pictures and trying to call Dad for Father's Day, I only stopped for a total of 20 minutes on the entire hike. It's great to get out there alone with my thoughts and enjoy some scenery.

Photos from the trip are in Outdoors > Tiger Mountain (the first five are from this hike.) And of course there is a new panoramic photo from this trip. I hiked up with a small tripod in my backpack to help with this one. It came out fairly well, but unfortunately the dark spot on the lens inside my camera is getting worse. I've noticed it for a while but it's to the point where I'm thinking of replacing the camera. I've tried to edit it out of the photos. That's a story for another day though. Click on the panorama below for the full size image.