When I moved into the new office, I came up with an interesting way to decorate the back wall. I used the National Geographic Topographic maps software to create a bunch of 8.5×11 PDFs. I printed everything off at Kinko's and then painstakingly placed each sheet on the wall with thumbtacks.

The whole process took forever. If I had it to do over again, I would pay extra to have it done on a plotter or some other large format. This would have saved a lot of time and also I think it would have looked better because some of the sheets didn't quite line up when I tried to place them on the wall.

That being said, I still think it looks pretty good. I get a lot of comments from people as they walk by my office. The map goes from Seattle in the lower left corner, east to Stevens Pass, and then north up to almost the north end of Whidbey Island. The smaller map on the side wall shows Mt. Rainier. As I go on various trips, I print off a small picture and stick it on the map.

I don't think I'll do it again (at least in this manner), but I'm happy with the way it came out. 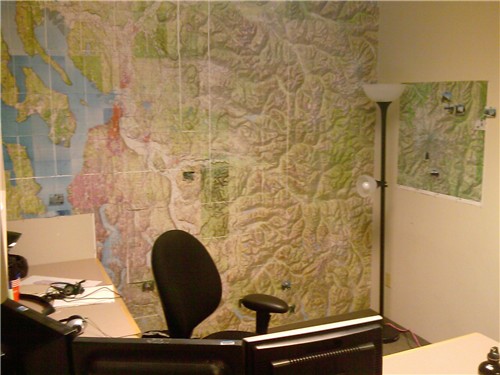