The day before my birthday, I headed out on one of my favorite local rides. It’s called the Three Pass Blast because you head through three very different mountain passes: Snoqualmie, Blewett and Stevens. I’ve done this before (and incorrectly counted it as four passes) and it’s a beautiful ride. I did it clockwise this time, and since I set out to do as little on two lane roads as possible, it changed the route a bit for me. I headed down 203 to Fall City and headed up past Snoqualmie Falls to North Bend. I hopped on I-90 for a few miles and then got off at exit 47 to catch NF-56. It’s a fantastic little twisty road that I’ve videoed before. When I’m king of the world, I will block off this road and stage a motorcycle race. After that I pounded the pavement on I-90 through Snoqualmie Pass before hopping off to catch US-97 north through Blewett pass. The dry, arid land is a stark contrast to Snoqualmie Pass. The heat was also starting to build so I didn’t waste any time getting to Leavenworth. I stopped for a quick lunch and then finished up with a beautiful ride through Stevens Pass.

It was a gorgeous day for a ride, and I was having so much fun that I didn’t stop to take any pictures. Sorry! You’ll have to take my word for it. I timed the traffic well and had fairly clear sailing until about 10 miles west of the Stevens Pass summit. It wasn’t anything too bad though and the 240 miles flew by. 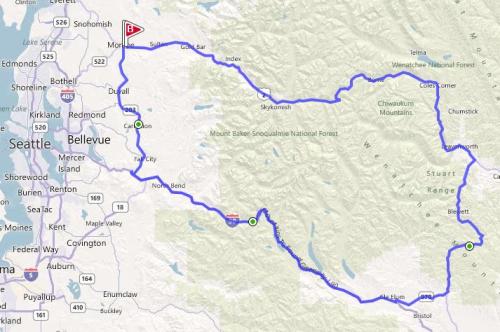