Tyla and I enjoyed watching the entire season of Treehouse Masters on Animal Planet. The shows all followed a strict formula but it was still fun to see what they came up with for each treehouse. Sidenote: it’s amazing how rude and ill-mannered rich people who want to buy treehouses can be (ie. the wife in the “Backyard Bungalow” episode.)

If you only watch one episode, check out the finale called “Love is in the Air.” Pete builds a treehouse on their own property so he gets to do exactly what he wants and wow, it’s a whopper of a treehouse! What’s even cooler for us is that we saw them building this while we were there. The film crew wasn’t there that day, but they had gotten the metal bridge supports in and were working on the main treehouse building. Pretty cool!

I’m so thankful that we stayed there last summer before this TV show hit. Even then it was nearly impossible to find an opening 6-8 months into the future and now they don’t even offer online booking or prices. You have to email them. I imagine they are flooded with requests! 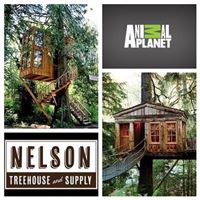 Last summer, Tyla and I spent the night in an amazing treehouse. While we were there, one of the owners told us that Animal Planet was filming a new reality show based on their treehouses. We never saw the show appear on TV so we figured it had been cancelled, but it’s on now! The show is called Treehouse Masters and new episodes are Friday nights. Full episodes are available online or on their mobile app.

We’ve only watched a couple episodes, but it seems like the show follows the genius behind the treehouses, Pete Nelson, as he builds treehouses for various families. The show feels like lots of other home improvement type shows, except instead of fluffy pillows and crazy paint jobs, the end result of this show is an incredible treehouse.

If you live in the area and like the show, consider spending a night in one of his creations at Treehouse Point in Fall City. It was pretty hard to book a room last summer so I imagine now it’s quite a bit harder with the show being on TV. Make sure you book well in advance!