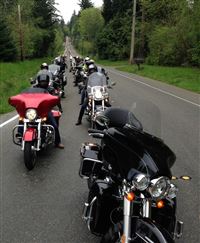 Approximately 3 hours after we signed up for a baby class, the annual Tulip Ride was scheduled on the same day. Thankfully we ended up taking a different class and Tyla was ok with me going on the ride without her this year.

This was my fifth time on the Tulip Ride. The first time I went it was about a dozen bikes. This year we topped 200 and raised over $5000 for charity before any company matching! There were police escorts both in Redmond and in Tulalip along with media coverage leading up to the event. It’s turned into a big production!

This was also the first year that we had some celebrities on the ride. Tricia Helfer and Katie Sackhoff of Battlestar Galactica fame were there riding some Harleys donated by Eastside Harley and taking pictures with a bunch of motorcycle riding geeks. And yes, I asked Tyla’s permission before taking a photo with Tricia.

On a sidenote, that’s probably the first time I’ve ever had my picture taken with a celebrity, at least that I can remember. It’s weird. I’m not sure I like it. “Hi, we both know I’m here just to take my photo with you and then we’ll never talk again. We both have jobs and yours just happens to put your face on TV, but we could argue about who’s job has a bigger impact on people’s lives. There’s nothing I can say that you haven’t heard a thousand times before and given the long line of people, you must just want to get this over with.” And then seeing the photo isn’t too encouraging either. Sometimes I look in the mirror and think I’m not that ugly. But then I look at the picture and it’s not hard to figure out who gets paid to look good for a living.

But back to the ride…

We started at Blazing Bagels in Redmond. Tyla and her family surprised me by showing up to watch us all leave. They weren’t alone as we drew quite a crowd of onlookers wherever we went. About 120 bikes left Redmond and we made our way up to Tulalip without staying in a super tight group. At Tulalip we picked up about another 80 bikes and then held the pack together for most of the way to the tulip fields before a car pulled into the middle of the pack and then let enough cars get in front of them that we completely lost touch with the pack. Thankfully between the four or five of us at the front of the second pack, we were able to remember the way to the tulip fields.

It started to rain near the end and since I’ve seen the majestic tulip fields many times before, I drove right past and headed home. It was a fun day but it I missed having Tyla along!

I geeked up a perfectly good motorcycle by putting two GoPros on the bike facing forward and backward. You can see the video on YouTube or embedded below. In most places it runs at 1000% of normal speed. I posted some of my photos to Flickr to share with the other riders.

I wonder if my son will want to go on one of these rides with me in the future?