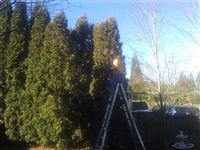 We have a row of arbor vitae trees in the backyard. They provide a nice visual block between us and the neighbors, but during the recent snow storm, they took quite a beating. The tops of the trees were bent down so far that I could hit them with a broom!

Thankfully they rebounded, but I thought I’d take a little action to hopefully help the situation next time. I purchased 100ft of 1 inch tree chainlock. That is now wrapped around all the trunks so that instead of individual trees, I now have one mass of trees that support each other.

While I was up there, I noticed that the previous owner had used some small rope to attempt the same thing on a couple of the trees. While those trees didn’t have quite as much trouble with the snow, the rope was really destroying the bark. In some places the tree had tried to grow around the rope and in others, the rope was rubbing the bark off. This plastic chain should do a better job and keep the trees healthy.

We’ll have to wait until the next snowstorm to see how well it works! 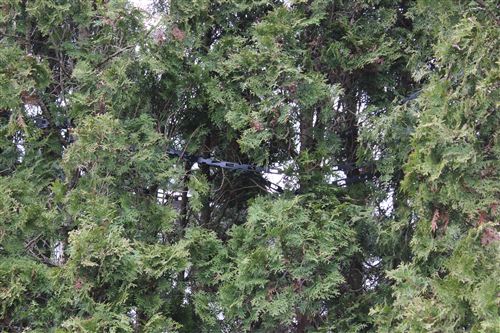