The motorcycle has seen more action now that it means a faster trip to work. I take the interstate a lot and motorcycles get to use the carpool lane. That can shave 10-15 minutes off my 25-30 minute commute. When the temps are down around 40, even a quick blast on the interstate will eat through my winter riding gloves and freeze my fingers.

I finally caved and purchased some air deflectors from ProjektD. They’re a French company that makes aftermarket parts specifically for Concours14 bikes. Just the air deflectors ended up being $45 in international shipping so I decided to pile a few more goodies into the box. There were a few other items but I haven’t installed them yet so I’ll just mention the radiator guard. The front tire can kick up rocks and damage the radiator so this shield take the brunt of the assault. I opted for the black powder coated version with the Concours14 logo cut into the bottom.

Both accessories were quick to install. The radiator guard looks good and the air deflectors function quite well. I was worried that they wouldn’t be tall enough since I have risers installed in my handlebars. The air just skims the top of my gloves. I could attempt to bend the deflector brackets a little or cut a different piece of plexiglass, but I think it will work as is. 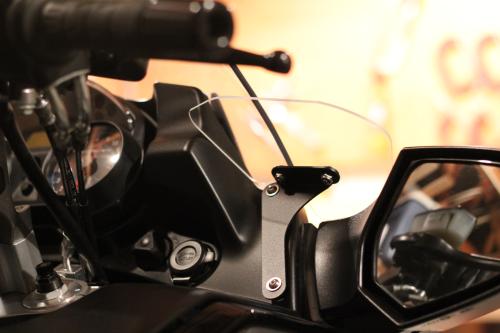