Evergreen Lutheran High School in Tacoma has a fundraiser auction every year. Every year I think about making something and then fail to do so. This year I made it under the deadline by about two hours.

I only had five days to whip something up so I decided to completely steal an idea from Nick at 6_8woodworks, and make some ornaments out of laminated scraps. Thankfully I had enough interesting pieces of the right sizes to make a few at the same time.

Since I have that shiny new CNC sitting there, I whipped up a drawing and was able to cut out 3 identical ornaments relatively easily. The only real trick was making the cut into Puget Sound wide enough for my 1/8″ bit to get in there. As I cut each one, I rotated my stock piece to get a slightly different pattern on each one. I finished them off with a bunch of sanding, boiled linseed oil, and some twine through a hole to hold it onto a Christmas tree.

I don’t expect these to raise a huge amount of money but it will be fun to see other people put a price tag on my woodworking. I almost exclusively make things for myself or as gifts so there’s no real price tag involved. 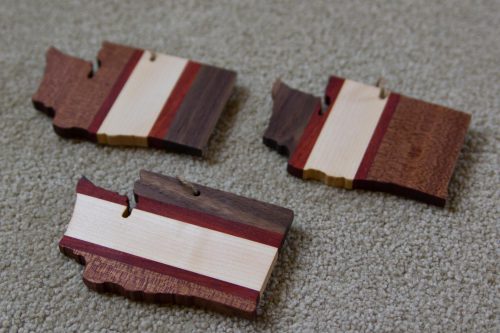