A few years ago, Steve Ramsey posted a fun video about how to make wooden snowflakes. I decided to give it a shot and it was harder than it looked! I had a strong suspicion that my first attempt would fail so I did it out of cheap pine. I made a bunch of mistakes and thought I had it figured out so I moved on to maple for my second attempt. Nope. He clearly says in the video to glue the face grains together. I don’t know if he misspoke or if I just understand what he means but when I do that, I don’t get six evenly distributed points. I won’t explain the whole thing here, but if you build this, make sure you hold it all together with rubber bands and make sure it looks right before you apply glue.

The third time was the charm and they came out pretty nice. My only failure was that even after the third attempt, the pieces still didn’t form a perfect 360 degrees so there are gaps between some of the pieces. Oh well, I was tired of the project by the time I got to this point so I called it good enough!

We only put a few on our tree. Some of these will go out as gifts to Elijah’s teachers, but if you want one too, let me know and I’ll see what I can do. 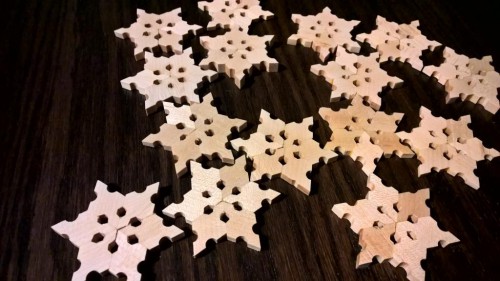