Tim and I worked pretty much every night last week. I got the fence along the west property line close to complete and Tim spent a lot of time getting the bottom layer of the retaining wall perfectly placed. We were hoping to have the wall done by Friday night but at 10pm that night, we called it quits and decided to finish it in the morning. Saturday morning we met at Home Depot at 6am to make sure that we could rent their walk-behind skid steer loader for the day. It was a critical piece of the puzzle. We finished the retaining wall by about 9am and then backfilled the wall with a drain and gravel. Andy and Logan stopped by to help out too. They started by digging a couple postholes and then started the French drain and irrigation trenches. It was really difficult digging. Thank you! We had another 15 yards of dirt delivered. It would have taken forever to drive each load up into the yard so we set up a relay instead. Tim used the machine to fill wheelbarrows. The other three of us took turns with the two wheelbarrows running loads up into the back yard. Moving 15 yards of dirt one wheelbarrow at a time sure takes a while but I was incredibly thankful to have the machine, someone who knew how to operate it, and lots of people to run the wheelbarrows. We called it quits for the day after that and fired up the grill to enjoy some dinner.

Since we had church Sunday morning and then I was busy in the afternoon, we decided to take the day off to catch up on some other chores like mowing, bills, etc. But even with that, Tim and Chelsea came over for a couple hours to cut and glue the caps onto the wall.

This week we are focusing on completely finishing a couple parts of the project like the retaining wall, the fence, and yard cleanup. Then we’ll move on to trenching for the French drains and irrigation. I need to get the next walls of the fence started at some point too.

I’d guess that in terms of effort, we’re more than halfway though the project. That’s not too bad for less than two weeks of work! The remaining bit might take us a little longer in terms of calendar days though since the schedule starts to fill up a bit with Father’s Day, Elijah’s birthday, etc.

I had the GoPros running on Saturday for another timelapse. I’ll also throw in a picture of where we finished on Saturday. 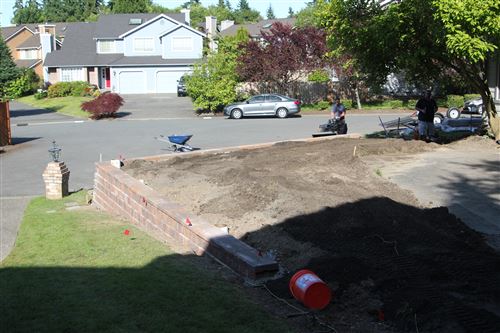