It’s hard to see a lot of change since the last update, but we’ve been working hard! The major accomplishments last week were installing French drains, installing downspout drains and getting the first part of the irrigation in the ground. That meant a LOT of trenching and some of it was through some incredibly compacted dirt. I took the day off Wednesday and spent a good portion of the day with a pick axe breaking through it. I was sore that night! It feels great to have this all in the ground and hidden away though. Our back yard should be significantly drier now. It had previously been a swamp any time it rained, but a majority of the water that falls on my property will now be piped away. And I’m very excited to have irrigation! Given the layout of the yard and the water lines, we actually started with the parts of the yard that need irrigation the least but that’s ok. We’ll get to the rest of it.

And I should also mention that Don came over three days last week to help me set fence posts. Thank you! We put cardboard tubes in behind the wall to hold back the rock and give us a place to set the posts. Those cardboard tubes started to fail a bit in the rains so Don helped me get them set. There are only three more posts to dig and set before I can start building most of the rest of the fence.

Our neighbors have been super nice during this project, and that’s a good thing since we feel a lot closer to them with this fence removed! They even asked Tim to come take a look at their back yard when he’s done. We had another neighbor stop by and ask for Tim’s card too. He does great work and people are noticing.

The next steps will be finishing the irrigation in the other half of the back yard, filling in all the trenches, setting those posts and then building the fence. The majority of the work is behind us but there’s still plenty to do. 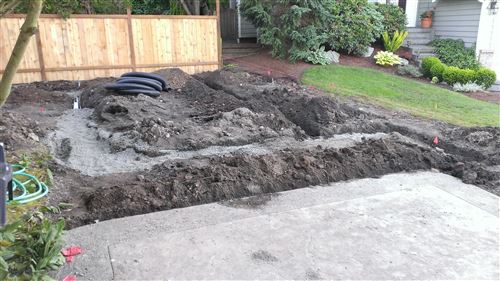