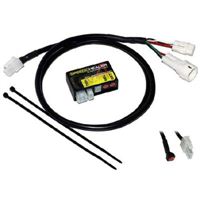 If you’ve used a GPS in your car, you may have noticed that it doesn’t match your speedometer and odometer. Just about every car on the market has about a 3% difference between your actual speed and the displayed speed. (You’re really going slower than you think.) Imagine the lawsuits if people were getting pulled over because their speedometer reported that they were going slower than they really were. The difference can vary by car, tire size, etc.

Since getting the latest set of tires on my motorcycle, I noticed that my speedometer was getting pretty far off. It’s annoying to do math just to figure out how fast I’m really going. An actual speed of 60mph was reported as something more like 63-64mph. It also means that you’re racking up the miles faster which devalues your vehicle quicker than it should.

Enter the Speedohealer. They make a little box that connects in between your speed sensor and the dash. (Vist the HealTech web site to find the correct wiring harness for your bike.) You tell it exactly how much your gauges are off and it will make sure your gauges read correctly. I did a couple tests on the interstate with a GPS measuring my actual speed until I got it dialed in correctly. The unit also comes with a little button that you can mount somewhere near your dash that will recall your max speed and display it on the speedometer.

Installation on my 2009 Concours wasn’t just plug and play. When the unit was connected, the bike got a little hitch in it’s giddy up at low speeds. The instructions with the unit (specific for my bike) said that I needed to send the unaltered speed signal straight to the ECU. That meant cutting one wire from the main wiring harness and splicing in another one. I had to make the cut right by the plug going into the ECU, so if I did something wrong, it would have been very difficult to repair. I finally took the plunge and made the snip with visions of a four digit repair bill if I screwed it up. Thankfully all went well.

I hesitated to post this because I wasn’t sure how legal it was to monkey with your odometer, but I couldn’t find anything that said it was illegal to calibrate it correctly. Either way, I’m happy to be able to tell how fast I’m really going and have my odometer read the correct mileage. I don’t usually carry a mapping GPS on the bike so when I need to make a turn in 17.4 miles, I’ll actually be able to find it now!