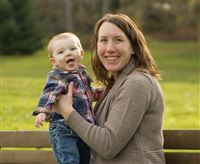 Thinking back on the year, it’s hard to remember anything before Elijah’s birth, but since he wasn’t born until June, there was obviously quite a bit that happened.

As the year began, we embarked on a month long master bathroom remodeling project. It seemed quite stressful at the time as I hemmed and hawed about doing it myself or hiring a contractor and as we tried to figure out what tile to buy. Then once we did find the tile, the wrong stuff was delivered and the replacement never arrived. Thankfully we had hired a contractor who was able to roll with the punches and he helped us find new tile that was in stock and ready for immediate use. There was so much drama around that whole event, but looking back it’s easy to see that God was smacking me upside the head telling me I had picked the wrong tile. I’m so incredibly thankful that it happened as the new design is much nicer than the slightly edgy/modern design that we were originally planning to go with.

Tyla graciously allowed me to get a season pass to Crystal Mountain and spend most of my Saturdays there while she sat at home and grew our baby. It was a tremendous season with huge snow dumps and some runs that will be forever burned into my memory. New skis and a visit from Jay topped off a great season. I imagine the next few years will see dramatically fewer days on the slopes.

We spent a lot of time getting the nursery ready: painting, buying furniture, replacing the blinds, adding curtains, and installing shelving in the closet. By the time we were done, it looked perfect, except that it was missing our son!

Before Tyla got pregnant, we had big visions of what we could do for a babymoon (our last vacation as DINKs.) We stayed a few nights at a resort on Orcas Island, enjoyed some down time and sampled a lot of the restaurants on the island. We look back on those quiet times now and wonder how long it will be until they happen again!

As the due date approached, our excursions got smaller and smaller until we were basically sitting around the house waiting for Elijah to arrive. As I mentioned in his birth story, the delivery process was nothing like we expected but at the end of it, we had a healthy mom and baby so we were happy and thankful.

I took the month of September off for my paternity leave (what an awesome benefit!) Mom and Dad came to visit during that time and it was really nice to have their help. We were able to take some small trips with them too including the Puyallup Fair and Orcas Island. They were also here to partake in the Duck Dynasty themed birthday party that Tyla organized!

During the month of September I also installed cabinets and built a desk to go in the theater room. It feels wonderful to have an actual place to work and lots of storage space.

I usually create these posts by looking through the folder names for all the photos we took during the year. Aside from the trips we took when Mom and Dad were here, they are pretty much all photos of Elijah around the house or within a few miles of it. Our calendar has never been more empty or felt so full. We don’t have much planned but sometimes it seems like it takes all our effort just to get through the day. We love our little man more than we ever could have imagined. I treasure every phase that he’s going through… but I’ll be very happy when we can all sleep through the night!

This is easily the most dramatic change to my lifestyle that I’ve ever experienced, but it’s wonderful. I’ve been very thankful for all of the time off I’ve had since he was born. It’s tough when I’m working because I see him for about an hour in the morning, and hour in the evening, and then throughout the night when he wakes up. I miss so much of his life! Tyla has been an incredible mother, staying home to take care of him and making sure he gets exactly what he needs.

It doesn’t take a genius to predict that next year will probably revolve around Elijah, and I’m so excited for that. There are some big milestones coming up as he learns to crawl and then walk. I try not to wish too much for the future and enjoy each day as it comes!