It’s time to stop opening these annual posts by talking about how short the year was because I feel like I just wrote that a few days ago… see what I did there? Let’s dive right into some of the highlights:

Dad and Mom have been out here for a few Easters in a row and this last one was no exception. During their trip, we got to go sailing with Larry from our church. Tyla and I have been out with him once before but this was a first for Dad, Mom and Elijah. The weather was cool but much nicer than should be expected for early April. 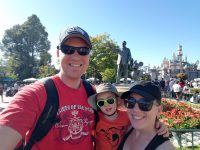 Disneyland! (And here’ a link to our trip video.) Tyla and I have talked about this since before we were married and this finally felt like the right year to do it. Being a bit of a tightwad on this stuff, I spent a lot of time researching and in the end I felt like every minute of that time was worthwhile. We felt relaxed going through the parks but I feel like we got to do more during that time than most people and the one day break in the middle of the two park days was perfect. Elijah was amazing and hardly complained at all. We spent the entire day in the park on both of our park days. It exceeded my wildest dreams for how smoothly the trip could go! 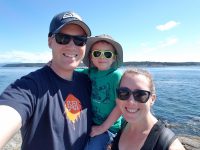 In June we headed to the shore with Tyla’s family. Since we were in Washington, that still meant that we were wearing winter coats, but the sun was shining. When people talk about Washington they often comment on how few mosquitoes there are. On that trip, we learned that this isn’t quite true. Washington has as many mosquitoes as other states. The difference is that in Washington, all of the mosquitoes congregate on the hike that we took. I’ve never seen anything like it.

We were supposed to go camping with Tyla’s family this summer, but since Don ended up being out of town for much of the year, we canceled it and replaced it with a day trip to San Juan Island. That ferry ride is always gorgeous and it was fun to go on a couple very short hikes and have lunch at San Juan Island Brewery.

Aside from Disneyland, the biggest thing I’ll remember about 2018 was our massive home improvement project. We had the siding and windows completely replaced and obviously got a new coat of paint when it was done. We were happy with the quality and had a good relationship with the contractors, but man, it took a long time! The original estimate was that it would start the first week of April and be done by mid-May. Yada yada yada, it didn’t wrap up until August. That made a huge different in the shape of our summer, but thankfully, it’s over now. It feels good to have that huge expense behind us. 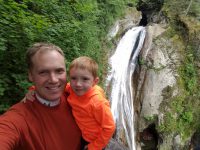 Elijah was too big for the hiking backpack so it was up to him to use his own two feet. I picked Twin Falls for his first hike and that was a big success. It was awesome to see the look of accomplishment on his face! I did one hike with Logan to beautiful Lake 22, a hike to Independence and Coal Lakes with Tyla, Elijah and Logan (that one had an awesome road to the trailhead), and then a hike around Crystal with Elijah and Tyla’s whole family. When Elijah was in the right mindset, he could do some impressive distances. I hope we can do a lot more next year! There are no shortages of amazing sights to see and I feel like part of my daddy duty is getting him off the concrete and carpet.

Speaking of Elijah, he had some big spills on his bike and scooter. The first was on his first attempt to ride down a hill at a skate park on his scooter. That one tore my heart because he was so excited to try and tried so hard to not cry in front of the big boys. The next accident was less than 48 hours before our trip to Disneyland. That thankfully didn’t require a doctor visit before the trip, but the second one was much more severe. He wiped out going around a slippery corner. He was riding behind me so I didn’t see it but I heard it and immediately knew it was bad. I got to him in a flash but his shirt was already covered in blood. Bad sign. To make a long story short, we ended up in the hospital to deal with a big split in his chin. They patched that up with fancy super glue and after about a week and a half he was back to normal (where “normal” now means “full face helmet”.)

Tyla and I had our first full weekend away from Elijah too. Mom stayed with Elijah at our house while Tyla and I headed to Hood River for a marriage retreat put on by our group of churches. What an awesome weekend! We missed Elijah but it was a great chance to strengthen our relationship and get a big block of time together. The retreat happens every two years and I think we’d book the next one now if we could.

Like the guy in Monty Python, my blog is saying, “But I’m not dead yet!” I have continued to sustain the trickle of posts every week. I’m happy I gave up on the “blog post every day” pace I was at before, but I do still feel like this is slipping away from me. Maybe it’s just a function of getting older, but when I have something to share, I find myself wanting to do an Instagram post instead of a blog post. Our family has a bunch of accounts that you can follow: benwmartens, tylammartens, elijahmartens, martenswoodshop, and elijahmakes. I have no plans to stop this site, but I can see the posts continuing to slow down. We’ll see how it goes.

For seven of the last eight years, I’ve been a trustee at church. (That basically means I’m a property manager.) This will be the last year for a while as next year I start a three year term as elder (someone who helps with church nurturing, growth and discipline). I expect it will take similar amounts of time but it will be a change of pace and maybe it will mean that I’ll trade extra trips to church for a little more time spent at home working on the computer and the phone. 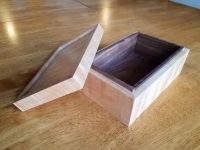 I stopped all woodworking projects in early April in preparation for the siding project. The windows were getting stored in the garage so that meant a bunch of other stuff ended up in my shop area. As that dragged on longer than expected, I was happy to see the last window finally disappear from the garage in July and I jumped back on the woodworking train. So a quarter of my year was lost, but I still managed to make some fun projects: side tables for the theater room, a walnut box to hold a Retro Pie, robot art with Elijah, a curly maple box, a cross made out of a tree I cut down, a wooden pixel Mario, a name puzzle, a wooden skid steer toy, built-in cabinets for the shop, and a plaque for Don’s Navy clock. The big addition to the shop was a CNC machine. That was in brand new so stay tuned for some early thoughts coming soon.

Looking ahead to 2019, the biggest thing on my mind is Elijah going into first grade. He’s at our church preschool and kindergarten this year, but the school stops with kindergarten. So whether we choose the public school or a private school, it’s going to be a huge change for our family. It’s comforting to know that God already has it planned out so I just need to keep my ears open and make sure I follow down that path.