Before this weekend, I had never been to the ER as a patient. (Don’t worry, this has a fairly happy ending.) It all started at a party at Tim and Chelsea’s house. I took a backwards/sideways step off the deck while I was talking to someone and my right foot went directly into one of the holes that their dog digs. I heard a pop as my ankle rolled.

I’ve had lots of sprained ankles and wrists in the past, and for a while it didn’t seem much different. I even played a couple more games of cornhole. After a while, I asked Tyla if we could leave the party a little early because it was starting to get sore. By the time I got back to her apartment to drop her off, it was hurting pretty bad so I decided to ice it there before driving home. Eventually it became clear that it wasn’t getting better and I couldn’t put any weight on it. With the impending wedding, I didn’t want to mess with a potential break so Tyla drove me to the ER.

I was extremely impressed with Evergreen Hospital. Upon entering the ER, we were immediately met by security who directed us where to go. We had a private triage room, friendly nurses, and the whole process felt quick. They wheeled me in for xrays but the results thankfully didn’t show anything broken. The doctor wrote me a prescription for vicodin (which I haven’t filled) and crutches. He said that in 5-7 days I should be feeling much better and that this was just a really bad sprain.

So I owe Tyla a HUGE thanks for driving me around late at night both to the ER and then to try and find a drug store that was open and sold crutches. I realized that I’m much better at giving help like this than receiving it. I love you!

The good news is that it’s already feeling quite a bit better. I spent much of Sunday with it elevated. While this sprain did feel a lot worse than ones I’ve had before, I probably would have just hobbled on it for a while instead of using the crutches. But Tyla is moving her stuff to the condo this weekend (she’ll live at her parents for the two weeks before the wedding) and I want to be healthy to help. And then there is the wedding in less than three weeks. So I’m glad we got the peace of mind that came with the xrays and I’ll take every precaution I can to help this heal as quickly as possible. 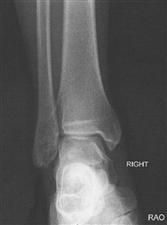 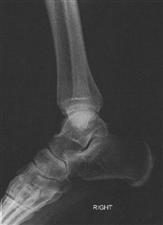