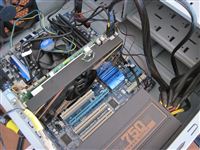 A couple weeks ago, I mentioned I was about ready to pull the trigger on the new computer. That day finally arrived and I carved out some time to put it together on Wednesday.

The only thing not in that list is the DVD drive which I took out of the old computer and the hard drives which I had laying around. The OS is on a 160GB drive and the two 250GB drives are in a RAID0 config. Since the whole computer is backed up daily to the Windows Home Server, I’m not concerned about the reduced reliability of RAID0.

The whole process took me about three hours to finish. I could easily do it again in less than an hour, but I was taking my sweet time to be careful not to destroy my ~$1000 worth of parts. I had about a 45 minute panic attack when it didn’t boot. The fans would spin, a couple lights came on and then it would die. It would continue to repeat that cycle until I shut the power off.

Finally I figured out that there was a second power plug that needed to go into the motherboard. Once I plugged that in, everything worked and I was in business!

I built this computer to handle HD video so while I was building it, I filmed the whole thing. Tonight I edited the video and it was fantastic. I wish I had a before and after demo for you, but previously I’d get maybe 1 frame every second or two and every time I started or paused the video it would take a few seconds to respond. With this computer, it plays back at regular speed and is extremely responsive. Rendering was also a breeze. What used to take a couple hours to render now takes about 20 minutes.

The real test, of course, is whether or not I’d try this again. Initially I would have said no but I think the nervousness has worn off and I might be willing to give it another shot. There was a definite cost savings over buying it prebuilt from Dell and I got higher quality parts.

And Ken, I should have listened to you and gotten a modular power supply. But even with that, I still would have a mess of cables running everywhere. I need to open it back up and break out the zip ties.

I sped up the video so the whole process takes less than 5 minutes. If you go to YouTube you can watch it in HD.