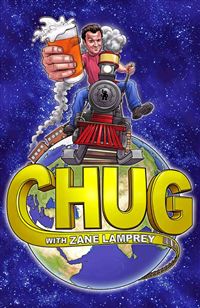 I first saw Zane Lamprey on a show that began in 2006 called Three Sheets. He traveled around the world learning about local alcohol and drinking customers. It was educational, intoxicating and funny all at the same time. The MOJO HD network got canceled and the show ended with it. The reruns fluttered around on various networks like FLN, Travel Channel and Spike but never got picked up for new episodes. You can still watch most of the episodes on Hulu for free.

His next show was called Drinking Made Easy. It was a similar idea except that this one featured a lot more of his friend Steve McKenna and it seemed more about drinking and less about education. I watched all the episodes but it never had quite the same appeal to me that Three Sheets did.

There were 50-60 episodes of each series before they died. Zane did some podcasting for a while but was always trying to find a way to get something like Three Sheets back on the air. It’s apparently very difficult to get TV studios and networks to pony up money for this type of show. So instead, he turned to his rabid and slightly inebriated fanbase in the form of a Kickstarter. The goal was to fund about 6 episodes of a new show he called “Chug.” The name is a reference to both drinking and the trains he’d use to travel from city to city. The funding campaign was an enormous success allowing them to produce more episodes and longer episodes than initially planned. The first episodes are coming out now, but you had to back his Kickstarter to view them. (Lucky me!)

In addition to the crowd funding, Zane put a bunch of his own money into the project too. In the end he had a show that was exactly what he wanted and he started shopping that around to the networks. But this time, instead of asking for money to produce the show, he was selling them the rights to air his program! What a different conversation! National Geographic liked it and will be airing the show. If it does well, they’ll fund another season out of their own pocket.

I’m not only happy for Zane and happy to see the new episodes of Chug, but I love this new model of funding your dreams. You no longer have to convince somebody behind a desk that your passion is worth their time. If your dream really does have a chance, you can prove it all on your own with crowd-funding from a site like Kickstarter. You cut out the middle man and go directly to the people.

I would have been even happier if Zane didn’t try to shop this around to the networks and instead did a completely web-based show, letting the people fund future seasons, but I guess there’s still enough money and distribution left in the networks to make that a worthwhile path. I’d be polishing my resume if I worked at a network though. Their days are numbered. 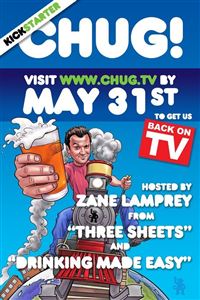 At the beginning of this month, I mentioned that Zane Lamprey is trying to fund his new TV show through Kickstarter. He did get an impressive amount of money, but with only a few days left, he only had about $350K of his $500K target. The way Kickstarter works is that if you don’t hit your goal, nobody pays a penny. Amazingly enough, he blew through his target with about a day to spare! He’s said that for $500K he can do five shows and for every $100K over his goal, he’ll add another show. He posted a pretty thorough breakdown of where the money goes. Here’s part of his post from http://chug.tv

Someone posted on my Facebook yesterday questioning how it could possibly costs $100,000 per episode to “follow you around with a camera”.  I explained to him that $500,000 six ways is actually $83,000.  But, there is also a 5% cut that Kickstarter takes and another 5% that Amazon takes to handle the thousands of transactions.  And, we have to fulfill all of our obligations to you, the Kickstarter backers. We’ll still have to buy, print, and ship thousands of t-shirts, hoodies, medallions, posters, DVDs, Blu Rays, as well as the travel, food, and venue rentals for the dinners and parties that we’ll be doing in LA, NYC, and Chicago.

And while that may still be a lot of money to have a camera follow a guy around to bars, it’s a very small budget to make an actual network quality TV show.  With Chug, as we did with Three Sheets, we’ll have over a month of planning and pre-production where the producers will need to lock down locations, hire fixers (international translators and location scouts), get shooting permits, carnets (certificates that allow us to ship our gear in and out of the country), coordinate travel, and get insurance (which alone is about $25,000).  Then, while shooting, there are: two camera guys, (with expensively rented cameras, gear, and lights), a sound guy, (with expensive rented gear), two producers, and the executive producer. This is aside from hidden daily costs like the flights, rental cars, train tickets, hotels, per diem, and food.  Then, as we’ll end up with dozen of hours of raw footage, we’ll need to hire editors, assistant editors, a post production supervisor, motion graphics animator, writer, and producers to put the show together.  And, during the several months that the production will be on-going, all of those people will obviously need to be paid… except me.

The money raised by Kickstarter, in fact, won’t be enough to fund Chug.  No money that comes in from the Kickstarter campaign will go into my pocket. I’ll actually be putting in my own money to get the show made to the quality that you should expect from a TV show.  The fact is that I am gambling on the idea that I can sell Chug to a network after the show is made and after the Kickstarter backers have all been given their rewards.  Even though they’ve all said “no” already, I have faith that some network will see what an amazing show we’ve made, be surprised by the dedicated fan base, and hire us to make more episodes.  That’s my contribution and dedication to the show.

It’s interesting to note that he’s not making a penny off this and is using it as a way to produce some episodes and attempt to sell them to a network. It’s a lot less risky for a network to buy episodes that are already done than to fund production and hope to make their money back. Then if the episodes do well on TV, they might buy more!

Congrats to Zane and his team for surpassing their goal and thanks to them for making more episodes! I’m excited to see them!