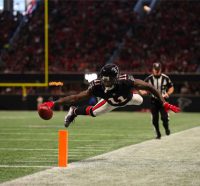 Thankfully the Seahawks won in San Francisco. I was pretty nervous going into the game and even after the first quarter, but by the end it was a comfortable win. I didn’t realize this, but the 49ers secondary is even more beat up than the Seahawks. If you haven’t seen the Bobby Wagner interception, it’s worth a look. The video is in this article and the interception happens around the 1:15 mark. The 49ers receiver caught the ball and then Bobby Wagner took possession of it on the way to the ground.

In our league, Luke, Logan and Austin all won easily and Luke secured a place in the playoffs. I assume that Logan and Austin are pretty much in barring a crazy scenario. The fourth place is the one that is up for grabs. Dad has it now but Andy has a good shot at it. I would have to win out and have Dad lose twice for me to make it in. We’ll know how it shakes out in two weeks.