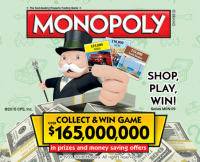 For the last couple months, I’ve been playing the Monopoly game at our local grocery store. When you buy items, you get game pieces and if you collect all the pieces in a specific set then you get the associated prize. I know it’s ridiculous to play but it was something to do during the times that I was watching Elijah but he was content to play by himself.

The most I ever won was a free DVD rental from Red Box (not even a BluRay) and a free jar of pickles. Yay. Totally worth my time.

I’d love to know exactly how much they actually pay out. They say they are giving away a hundred of million dollars, but there are so many sneaky ways that they don’t actually end up paying.

I knew all this going in, but I still played.

When it finally ended, I looked up the odds. I should have done it from the beginning. Here are some of the interesting stats:

It’s relatively easy to collect all the non-rare pieces. The whole game really boils down to just finding those rare pieces. I’m guessing that I probably acquired around 400-500 game pieces over the course of the game. So even with all that work, my odds of winning anything were tiny. Put all those numbers together and I had about a 10% chance of winning anything worth more than $10. Bump it up to a prize worth more than $100 and my odds fell to less than a percent. That’s not a very good return on my time investment.