We went a few years without any snow in the lowlands (that’s what we call the area where we live as opposed to the foothills or the mountains.) But this year, we’ve had two snow events! This most recent one hit on Sunday evening after the Super Bowl. The forecaster that I follow, Cliff Mass, did a great job of showing the uncertainty around the forecast and what all the various models were showing. The average of all the models nailed the forecast this time and we ended up with 5″ of snow at our house. People who live on the higher hills (500-1000 feet above us) got an extra foot.

This closed everything down on Monday. It started to melt a bit on Monday evening and then it all froze up on Tuesday which canceled schools again on Tuesday. Now we’re melting it all down with more normal weather (50 and rainy.)

The last time we had snow, Elijah couldn’t get enough of sledding, building snowmen, etc. This time he wasn’t as interested in those things and had more fun with his shovel and wheelbarrow. I did get a good giggle out of him though as I clipped into my skis and took a slow run down our street. 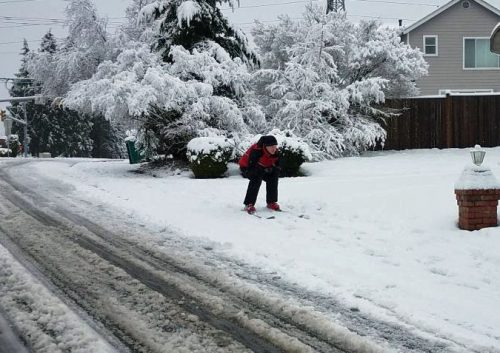 All the heavy snow on the branches cause a lot of trees and branches to come down. A small one fell across the street from our house and a lot of big limbs came down at the church. I stopped by on Tuesday night and took six loads of branches over to the brush pile. There was some minor damage to the playground that I’ll repair as well. But we were lucky. At the peak, there were over 200,000 people without power! 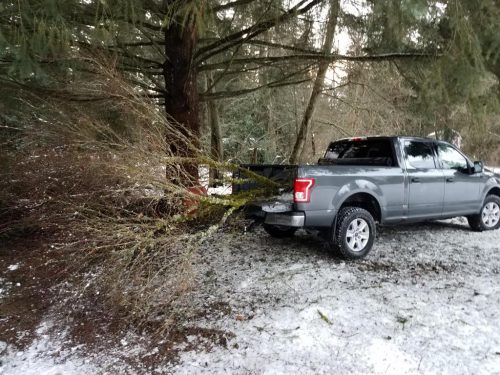 This wasn’t the worst snow storm in Seattle history but it’s up there pretty high. It was nice to be able to stay at home for the most part and not feel pressure to drive anyway. I’m able to work from home and Elijah’s school was canceled so it all worked out well.