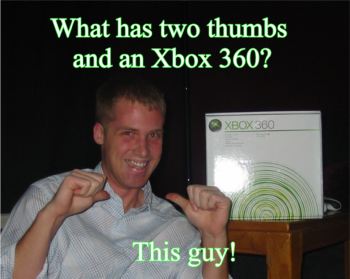 Today was the day. It finally happened! All the waiting has paid off. Here's how it happened…

Around 3pm I was sitting at work and I got notified (notifywire.com) that there was a new bundle for sale on WalMart.com. I definitely didn't want to buy 6 games and all the extra stuff they were selling just to get the 360, but I had this plan to return everything except the console. It was a risky move though and I've been holding off in hopes of getting one in a store with no bundle. While I was searching around looking for information on Wally World's return policy, I saw a couple links to inventory searches at Best Buy and Circuit City. The Best Buy site said there were two stores that had them in stock! I immediately called the one in Northeast Philly and he said there were two premiums and three cores left. In about 30 seconds I had vacated my desk and fled the building. It took me a half hour to get there (thanks to Cho for navigation help on the phone), but I was too late. There were only two cores left by the time I got there. For those that don't know, the Core version is $100 less than the Premium version but it comes with a wired controller instead of wireless, no hard drive, and no HDTV cable. In short it's not a good deal. My willpower won out and I didn't get the Core. I flew back home, jumped on the computer, and saw that the second store still had them in stock. I called the store as I ran down the stairs armed with my GPS, but he wouldn't tell me how many they had. Oh well, I didn't have anything else to do. I drove up to Levittown (about 30 minutes up the interstate), walked inside, and was greeted by empty shelves. I decided to at least ask if they had any Premiums and he went in the back to check. Sure enough, he walked out with a box. It was too good to be true! I picked up a copy of Call of Duty 2, and I was on my way back home.

So why am I blogging instead of playing? I was able to play for about an hour, but now I'm headed off to dinner in Philly at the Melting Pot to celebrate Kristin's birthday. Believe it or not, there are a few things in life better than a new game console. Large pots of cheese and chocolate in the company of good friends qualifies.

It's going to be a fun weekend.