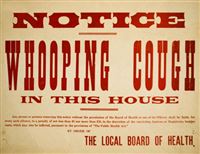 Note: I realize that some of you are anti-vaccine. This post is being written because I find it amazing that we can have an epidemic like this, not necessarily to try to change your mind about vaccines.

Visits to the OBGYN are usually full of facts about things that have never crossed my mind before. On one of our first trips, we were asked if we had been vaccinated recently for whooping cough. I’d never even heard of it. Maybe I’m the only one, but I’ll explain a bit anyway.

The scientific name for whooping cough is pertussis. It’s a bacterial disease that causes severe coughing fits. In serious cases, it can result in death. A research paper from 2012 says that it affects 48.5 million people and kills 295,000 every year. It spreads through droplets produced while coughing, talking and sneezing. Young children are most susceptible to the disease and run the greatest risk of death if contracted.

It turns out that I had received a whooping cough vaccine at a few points in my life, though not recently. It’s commonly distributed as part of your tetnus shot, or TDaP which stands for Tetnus, Diphtheria and Pertussis. That’s usually given every 10 years but the pertussis vaccine is only good for three years.

Little did I know that I’ve been walking through a whooping cough war zone for the past year. The Department of Health for Washington has a good website with lots of information about the outbreak. This report shows that last year the levels were 15 times greater than the baseline and eight times greater than what they would call an epidemic! Thankfully the numbers are starting to decline through education and vaccination.

The docs recommend that we get the vaccine ourselves and also ask anyone who is planning to have close contact with our child to do the same. I got mine done last week (insurance covered the cost) and Tyla will get it at a specific upcoming point in her pregnancy. Even if you’re not around babies a lot, it’s worth considering getting vaccinated to help control the spread of this disease.